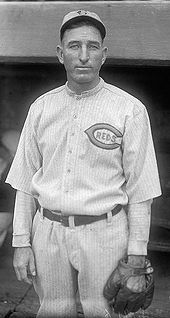 Roy Mitchell had a long pro career, including seven years in the majors. He had most of his big league appearances with the St. Louis Browns, getting the most work with the Brown in 1913 when he pitched 245 1/3 innings and went 13-16. He had twice won 20 games in the minors before he broke in with the Browns, and would go on to win 31 games with two minor league teams in 1921. Among other stops, he spent all or part of four seasons with the Vernon Tigers and all or part of four seasons with the Dallas Steers.

The Salt Lake Tribune, April 8, 1918, referred to Roy as a "hard luck" slabster, saying that the jinx which had pursued him in 1917 was still there in 1918 when he pitched a two-hitter but lost.

During 1924-26 he managed in the minors, still playing during at least some of that time.