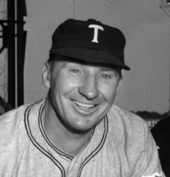 Roy "Hardrock" Johnson pitched 50 innings for the Philadelphia Athletics in 1918. Johnson was a year older than second baseman Jimmie Dykes.

Wikipedia's article on Johnson says he was given the name "Hardrock" as a manager because of the tough way his teams played. Some sources spell it as "Hard Rock".

He managed several teams, including at Catalina, where he also lived for several years.

He is one of three major leaguers with the name "Roy Johnson"; the other two were outfielders.

He was a longtime Chicago Cubs coach and served as the team's interim manager for one game in 1944.