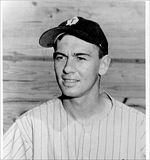 Growing up in Toronto, Ron Stead lived close to Maple Leaf Park, where he spent quite a bit of time. Befriending the Leafs' trainer, Bill Smith, the young boy got to be the Leafs mascot in 1946, and their batboy the following year. He would also get to improve his pitching skills by tossing during batting practice for the club.

As his skills improved, he signed a contract with the club. He was 10-17 with a 3.04 ERA for the 1956 Orlando Seratomas. With little support from the last-place team, he led the Florida State League in losses. The Maple Leafs sent him to the Gainesville G-Men in the Florida State League in 1957, where he had 17 wins to 10 losses and a 2.43 ERA despite playing for a 60-78 squad. He just missed the FSL's top 10 in ERA in a pitcher-friendly league.

Toronto asked him to return to the FSL the following year, but Stead declined the offer and returned to Canada. Upon his return, he signed with the Brantford Red Sox of the Intercounty Baseball League where he would play for almost a decade (from 1958 to 1966). He went on to become one of the best pitchers in the Intercounty league, leading Brantford to six championships. Notably, he won 12 games in 1960 and had a league record of 149 innings. Not happy with those numbers, he went 14-1 in 1963 with a tiny 0.63 ERA.

Stead then moved to the Guelph C-Joys in the Intercounty League in 1967. That year, he posted a 0.35 ERA and helped Guelph make the playoffs. In 1970, he led Guelph to a league title.

He also represented Canada at the 1967 Pan-Am Games in Winnipeg, MB, being a member of the first Canadian national team. He tied for the event lead with 23 strikeouts as the bright spot on a last-place Canadian entry. Stead tore the a cartilage in his knee on the last practice before opening day, but the determined southpaw overcame the injury to hold the Mexican national team to five hits over seven innings, while amassing 10 strikeouts. Among those he outpitched were a couple of guys headed to the majors down the line, such as the USA's Paul Splittorff. The lefty also played for gold medal-winning Team Ontario at the 1969 Canada Summer Games.

Ron Stead was inducted in to the Canadian Baseball Hall of Fame in 2006, based solely on his amateur play. Stead's number 7 is also listed as an "Honoured Number" by the Brantford club.

When not playing ball, he worked as a meter reader with Union Gas from 1959 until he retired in 1994.