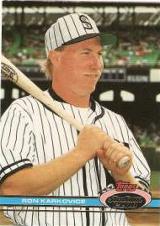 He hit an inside-the-park grand slam against the Minnesota Twins on August 30, 1990. David West was the pitcher. He hit it to the gap and the two outfielders waited for it to carom off the wall, but instead it just stayed by the wall. They then went though a routine where they both stopped for a second, expecting the other to move towards the ball, then both jerking towards it at the same time, then both flinching and stopping when they saw the other going. Finally, one got to the ball, but fell over as he went to pick it up. He tried tossing it to the other outfielder, who obviously wasn't expecting it, because he moved out of the way when the ball went at him. By the time they finally tamed the ball and got it in the infield, Karkovice had scored. He hit 5 grand slams during his career.