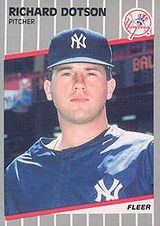 Richard Dotson pitched a dozen years in the majors and was perhaps the most consistently solid member of the Chicago White Sox rotation in the 1980s.

Initially selected by the California Angels in the first round of the 1977 amateur draft, Dotson was traded to the Chicago White Sox later that year in the deal that brought Brian Downing to California. He was called up by the Sox in September 1979 and threw a shutout in his second big league start. Over the course of the next three seasons, he was essentially a .500 pitcher while a member of the Sox rotation, going 32-33.

All that changed in 1983, when he won 18 of his last 20 decisions to go 22-7 with a 3.23 ERA for the division champion White Sox. He finished second in the American League in wins (behind teammate LaMarr Hoyt) and winning percentage and became the youngest twenty game winner for the Sox since Reb Russell in 1913.

Dotson's success continued into the 1984 campaign, when he went 11-4 with a 2.64 ERA in the season's first half and pitched two scoreless innings in the All-Star Game. However, he went 3-11 the rest of the way as the Sox fell to a disappointing fifth place. His next season was cut short, as a circulatory problem near his shoulder limited him to just 9 starts, and he led the AL with 17 losses in 1986. He bounced back somewhat in 1987, going 11-12 and taking a no-hitter into the ninth inning at Yankee Stadium on July 26th (before ultimately losing the game).

Dotson was traded to the New York Yankees after the 1987 season but was released midway through the 1989 campaign. After another stint with the Sox, he signed with the Kansas City Royals for the 1990 season. That season, his final one in the majors, was marked with disaster, finishing 0-4 with an ERA over 8.

Richard is the biological son of Turk Farrell. He grew up not knowing who his real father was. The truth was only revealed through genetic testing conducted via a genealogical website.