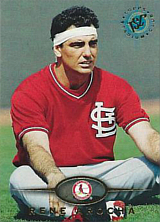 René Arocha defected from Cuba in 1991 and quickly signed with the St. Louis Cardinals. After a decent rookie season, he suffered through a series of injuries, missing the entire 1996 season. His last big league action came with the San Francisco Giants in limited duty in 1997.

René was the least effective Cuban pitcher in the 1988 Baseball World Cup, going 0-1 with a 6.00 ERA. In 15 innings, he walked 9 and allowed 17 hits. He was Cuba's starter in the final and allowed 1 run in 2 2/3 innings but walked 3 before being removed in what would be a victory over Team USA. He was much better (1-0, 0.82) for Cuba in the 1990 Central American and Caribbean Games, when they again won Gold.

His grandfather, Bernardo Rodríguez, won the first game ever for the national team back in 1926 and later taught Arocha how to pitch.