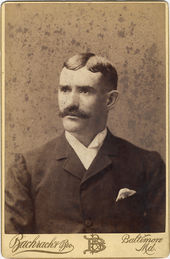 "Reddy Mack's playing since he got in the game has been a surprise to even his most ardent admirers. He has hit the ball hard and often, and played the second bag in good style." - from the Sporting Life, June 12, 1897, about Mack's play for Hartford in the Atlantic League

Second baseman Reddy Mack was one of four major leaguers born in Ireland in 1866. He played his major league career in the American Association, where he was an above-average hitter, reaching a peak in 1887 when his on-base percentage of .415 was in the top ten in the league.

For whatever reason, in 1888 his hit-by-pitch total went way up, perhaps because his batting average was way down.

Defensively, his range and fielding percentage were about average for the league.

He was part of a play in 1887 where as a baserunner he "jostled" the catcher after he crossed the plate in order to help the baserunner behind him score. Whether Mack could be called out for interference was in question because the rule at the time only prevented "baserunners" from interfering, whereas Mack had already finished running. However, the umpire called him out anyway. See the book "Fair Play".

The Sporting Life issue of August 12, 1911, mentions Mack in connection with the Mountain States League, apparently as a manager.

One observer named Mack to his "All-Ireland" team, composed of players born in Ireland.