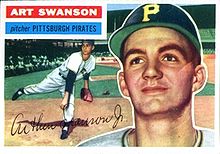 Art "Red" Swanson was an eighteen-year-old right-hander when he was signed to a $20,000 bonus contract by the Pittsburgh Pirates in 1955. He had just finished his freshman year at Louisiana State University and had to remain with the big league Pirates because of the two-year bonus rule that was in effect at that time. He was used sparingly in 1955, appearing in just one game, and made nine appearances in 1956, all in relief with no decisions. But instead of being sent to the minors for seasoning like most bonus babies, he made the Pittsburgh staff in 1957 and beat the St. Louis Cardinals, 8-1, in his first start.

Evidently Art was affected by Herb Score being hit in the eye by a line drive as he would take the mound wearing a specially designed rubber-and-wire protector. "Red" finished the 1957 season and his major league career with the Pirates, winning three games and losing the same in 32 appearances with a 4.90 ERA. He spent the next six years (1958-1963) in the minor leagues, never returning to the majors.

Swanson dropped into the minors in 1958 spending the year with two clubs, the Columbus Jets of the International League and the Lincoln Chiefs of the Western League, going 5-9 with a 4.50 ERA. Art had only one winning year in the minors, going 12-7 with a 3.75 ERA in another split season for the Asheville Tourists of the South Atlantic League and the Macon Peaches of the Southern Association in 1961. Art decided to leave baseball in 1963, finishing up with a minor league record of 37-38 and a 3.93 ERA.

He was the son of Art "Big Red" Swanson, the baseball coach and assistant football coach at Louisiana State University. As of last notice, Swanson resided in his birthplace of Baton Rouge, LA, where he worked in the oil-leasing business.