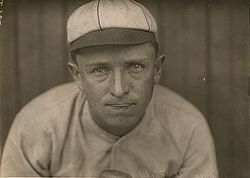 "Rebel Oakes is a streak of Louisiana lightning. He can travel to first like the Pennsylvania Limited shooting through the Jersey meadows." - Sporting Life of May 8, 1909

Rebel Oakes was a starting center fielder for all of his 7 years in the major leagues during the dead-ball era. He was the first major league player out of Louisiana Tech University, and played first in the minors in Los Angeles before coming to the majors.

His first major league season was in 1909 with the Cincinnati Reds, where he hit .270 on a team which hit .250. He stole 23 bases, which was to become a typical total for him in his major league seasons. He was then traded to the St. Louis Cardinals where he spent his next four seasons.

The back of one of Oakes' baseball cards claims he was never as good a hitter after he was beaned in 1910.

In 1914, he joined the Federal League and spent his last two major league seasons there with the Pittsburgh Rebels. He also managed for most of 1914 and all of 1915. In 1914 he hit .312, tying Ed Lennox for the highest batting average among the regulars on the team. Neither Oakes nor Lennox made it back to major league baseball after the Federal League folded.

"The minute I severed my connection with Organized Base Ball, my interests were with the Pittsburgh Club and the Federal League only . . . As to my trying to disrupt the St. Louis Ball Club, it is all a mistake, but unfortunately for Mr. Britton, he had two or three players on his club that I very much desired on ours, and fortunately for us, I have them now." - Rebel Oakes' comments in Sporting Life, November 21, 1914; Sporting Life stated that "The 'Rebel' during his one season in Pittsburgh has made many friends, not alone by his individual playing, but because of his geniality."