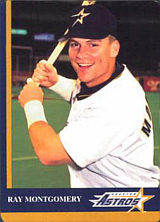 Ray Montgomery was drafted by the Houston Astros in the 13th round of the 1990 Amateur Draft from Fordham University. He played parts of three seasons for the Astros from 1996-1998 and he hit .241/.281/.356 while appearing in 47 games. Montgomery completed his playing career in 2001.

The Milwaukee Brewers hired Montgomery in late 2002 as an area scout, a role he held through 2006. He signed Rickie Weeks in 2003. He was then the Brewers' Midwest supervisor for two years and their assistant scouting director for two years. Montgomery was named the Arizona Diamondbacks Director of Amateur Scouting for 2011, replacing Tom Allison. In late 2014, he returned to Milwaukee to become their Vice-President of Amateur Scouting/Special Assistant to the General Manager. In late 2018 his title morphed into Vice-President/Special Assistant to the General Manager where it stayed through 2020.

In 2021, he was appointed Director of Player Personnel for the Los Angeles Angels. In 2022 he joined the coaching staff as a bench coach, sharing duties with Mike Gallego. Montgomery even spent one game as the Angel's acting manager while interim Manager Phil Nevin served a 10-game suspension.