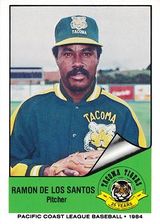 Ramon de los Santos pitched 12 games with the Houston Astros in 1974, posting an ERA of 2.19, which was the lowest on the team that year.

De los Santos, born in the Dominican Republic, signed as a free agent at age 23 with the Astros and was immediately put at AAA level Oklahoma City in 1972. He pitched for Columbus during parts of 1973, 1974 and 1975.

Ramon had previously pitched in both the Dominican Republic (one source says he had a long career pitching there) and also in Mexico. After most of his minor league career he pitched again in Mexico.

After his playing days he became a scout for the Seattle Mariners. The book Big Papi about David Ortiz mentions him as one of the scouts who discovered and signed him. He also managed the 1992-1996 DSL Mariners.