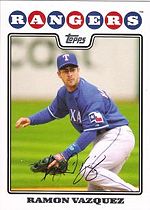 Though not taken until the 27th round, Ramon Vazquez was actually drafted 8 spots ahead of Matt Thornton, a high school left hander that would go on to be a 1st round draft pick three years later. While batting 9th for the Texas Rangers, on August 22, 2007, Vázquez had a big day in the first game ever in which an American League team scored 30 runs. He homered twice and drove in seven runs. With his 9th-inning home run, he became the first major leaguer since the 19th century to score his team's 30th run of a game.

Vazquez became a coach with the Lancaster JetHawks in 2014-2015. He then moved into the manager's role with the same team in 2016. In 2017, he was named infield coach with the San Diego Padres. In 2018, he joined the coaching staff of the Boston Red Sox, with his role being to ensure the liaison with the club's advance scouts and its statistical analysts. In 2021, he took over first base coaching duties during the season after Tom Goodwin refused to get a COVID-19 vaccine.