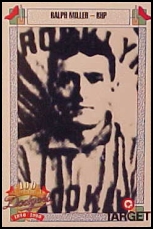 On the occasion of his 100th birthday, he mentioned that he had never heard of pizza. So to honor the occasion, the President of Pizza Hut sent him a three-foot-wide pizza with his name spelled out in pepperoni. His reaction? "No! I won't eat it."

Charlie Emig was the last survivor of the 19th Century, though his status as such was unknown until about twenty years after his death. He was a "missing" player for many years, and the discovery of his life data in the Mormon archives a few years ago was the first knowledge of his longevity.

Miller was recognized, at the time, as the last man from the 1800s. In his final decade, he would respond to signature requests readily, and proudly include an inscription giving his age. Dummy Hoy (1862-1961) had held the age record (99) before Miller, and one other player, John Hollison (1870-1969), had also attained 99. Lou Polli has since died at 99.