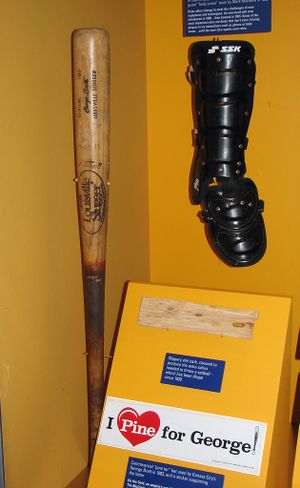 Brett's pine tar bat (shown at the left of the image)

The Pine Tar Game involved one of baseball's most celebrated and unusual incidents.

On July 24, 1983 at Yankee Stadium, the Kansas City Royals trailed the New York Yankees, 4-3, in the top of the 9th inning. With U.L. Washington on first base, George Brett hit a home run off Goose Gossage that apparently put the Royals in the lead.

However, Yankees manager Billy Martin had noticed Brett's bat had quite a bit of pine tar on the barrel. Coach Don Zimmer urged Martin to have Brett's bat inspected. Pine tar is often used to improve a player's grip on the bat. Martin cited Rule 1.10(c) [1] which states: "The bat handle, for not more than 18 inches from its end, may be covered or treated with any material or substance to improve the grip." Brett's bat had pine tar nearly two feet (or 24 inches) from the knob.

As Brett took his seat in the dugout, he noticed Martin discussing the home run with umpire Tim McClelland. Brett recounted afterward that he'd said: "If McClelland calls me out, I'm gonna kill him." Brett did not account for the fact McClelland was 6'6" and 240 pounds. McClelland, after initially inspecting the bat, spoke with the three fellow umpires and got a second measurement from crew chief Joe Brinkman.

McClelland raised his right thumb to call Brett out and Brett exploded. He leaped from the dugout in a rage along with coach Dick Howser. He was restrained by his teammates and ejected. After the game, the Royals filed a protest with the league office.

During the confusion, Royals pitcher Gaylord Perry tried to steal the bat, but a guard prevented him from confiscating the evidence. Perry was ejected as well.

American League president Lee MacPhail ruled that Brett did indeed break rule 1.10(c), but that the home run should stand. He also requested that the rules be clarified. On August 18th, the two teams returned to Yankee Stadium to play the last four outs of the game with the score Royals 5, Yankees 4.

The ending was even more bizarre as Yankees star pitcher Ron Guidry manned center field for the resumed portion of the game, as the centerfielder on July 24th, Jerry Mumphrey, had been traded in the interim. Left-handed thrower Don Mattingly was stationed as second base, the last time in baseball annals that a lefty has manned one of the two middle infield positions. Before the game began, the Yankees appealed that Brett had not touched every base, but umpire Tim Welke had a notarized statement from the previous umps that Brett had touched each base. The game ended without incident and the Royals were the 5-4 winners.