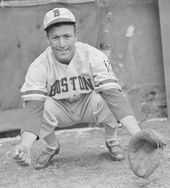 A Chicago native, catcher Phil Masi attended Austin High School and reached the majors with the Boston Bees in 1939. When World War II began, he was exempt from military service because he was his mother's sole supporter. By 1945, he became the regular catcher of the Braves, as they were again known, and he was an All-Star from 1945 to 1948. He had his best season in 1947, when he hit .304 with 9 homers. That same season, he earned notoriety for being the catcher in Jackie Robinson's first major league at-bat.

In his tenth season with the Braves, Masi reached the World Series in 1948, splitting time behind the plate with Bill Salkeld. He was traded the next season, and after a brief stint with the Pittsburgh Pirates, he played three years with the Chicago White Sox. He retired after spending 1953 in the minors with the Dallas Eagles.

He is perhaps best known for a pick-off play attempted by Cleveland Indians pitcher Bob Feller and shortstop Lou Boudreau in the 1948 World Series. In the bottom of the 8th inning of Game 1, Masi pinch-ran for fellow catcher Bill Salkeld. Mike McCormick bunted Masi to second on a sacrifice. Feller intentionally walked Eddie Stanky, who was replaced by Sibby Sisti. Feller then tried to pick Masi off second. Lou Boudreau appeared to tag Masi out, but umpire Bill Stewart called him safe. Tommy Holmes then singled Masi home with the only run of the game to give the Braves a 1-0 victory. Although this gave the Braves a 1-0 lead in games, the Indians bounced back to win the World Series in six games.

During his career, Masi was considered a top defensive catcher. He also showed a little speed, stealing several bases a year when that was not common for catchers and also getting a few triples each year.

After his baseball days ended, Masi worked in a printing business. He died of cancer at age 74.