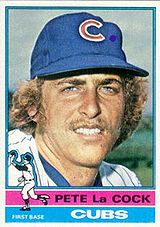 Pete LaCock, the son of Hollywood Squares host Peter Marshall, was a first baseman, outfielder, and DH for nine years in the major leagues. He is best known for his 1977 and 1978 years, when he hit .303 and .295 respectively for the Kansas City Royals. His last major league appearance was in Game 2 of the 1980 World Series.

A first round pick out of high school by the Chicago Cubs in the January 1970 amateur draft, he broke into the majors in 1972 at age 20. He was MVP of the American Association in 1974. That year, as the first baseman for the Wichita Aeros, LaCock hit .327 with 23 homers and 91 RBI. According to an August 3rd Sporting News story, LaCock became angry at Frank Haraway, the official scorer for Denver Bears games. LaCock had been charged with a fielding error after not being given a hit earlier in the game. He picked up a ball and threw it in the press box, narrowly missing Colorado Governor John Vanderhoof who was sitting near Haraway. LaCock was suspended one game for this by Joe Ryan, AA President.

Pete's only career grand slam came with the Chicago Cubs. He slugged it off one of the final big league pitches thrown by Hall of Famer Bob Gibson, September 3, 1975 at Busch Stadium II, in a 11-6 Cubbie victory. Several years later, LaCock squared off against Gibson in an 'old-timers' game. Gibson's first pitch drilled Pete in the ribs.

LaCock went to Japan in 1981 with the Taiyo Whales after signing a two-year contract for $800,000. He said he was not worth that much. He hit .273/.359/.433, unimpressive for a 1B. He was criticized for his refusal to bunt in one game, for going into the Yomiuri Giants clubhouse to talk to Yomiuri OF Gary Thomasson, and for making excuses when he made an error. He once gave his bat to the umpire as a dispute for a called third strike, saying "You're taking the bat out of my hands, anyway, so you might as well have it." Due to his poor performance and his behavior, he was released even though the club had to pay his full 1982 salary.

In 1989, he played for the St. Petersburg Pelicans and Winter Haven Super Sox of the Senior Professional Baseball Association. LaCock batted .318 with 4 home runs and 35 RBI in 71 games. In 1990, he played for the Sun City Rays, also from the Senior Professional Baseball Association. He was leading the league in both batting average (at .407) and on base percentage (at .500) in 23 games when the league folded.

LaCock served as the hitting coach for the Tucson Toros in 2009, helping the club to their first playoff berth in the Golden Baseball League.

This article [1] indicates that, as of 2019, LaCock is retired. In the article, he talks about the friendships he formed with the celebrities on Hollywood Squares, as well as about his baseball career.

Sources include You Gotta Have Wa by Robert Whiting