Note: This page is for major league pitcher Pedro Báez; for others with similar names, click here. 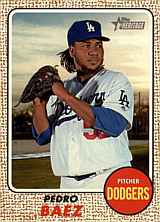 Pedro Báez was twice picked for the Futures Game as an infielder, but he made the big leagues as a relief weapon.

In 2013, the Dodgers decided to turn him into a pitcher, and his status as a prospect was reignited. He split the summer between the Quakes (2-2, 2 saves, 3.63 in 32 games) and Lookouts (1-1, 4.24 in 16 games), striking out 55 in 58 innings. He was 8th in the Dodgers chain in games pitched. In the Arizona Fall League, he fanned six and allowed no runs in 4 1/3 innings for the Glendale Desert Dogs. He opened 2014 well with the Lookouts (1-0, 5 saves, 2.84 in 11 games). Within a year and a couple of months of taking up pitching, and fewer than 50 minor league pitching appearances, he made his big league debut for the Dodgers on May 5, 2014. Called up to replace Stephen Fife, he made his debut in the 8th inning of a loss to the Washington Nationals. He allowed a single to Ian Desmond and a homer to Danny Espinosa before calming down to fan Kevin Frandsen, retire Sandy León and strike out Tyler Moore.

Báez is known to be an extremely slow worker on the mound, taking more time between pitches than any other major league pitcher. In 2017, he received several written warnings from commissioner Rob Manfred to pick up his pace. That year, Jeremy Jeffress became the slowest working reliever in the game.