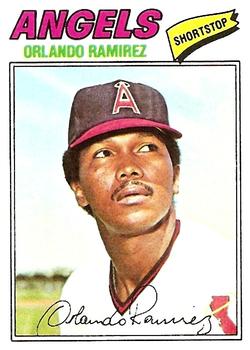 Orlando Ramirez was the first man trained in Colombia to reach the majors; decades before, Lou Castro had been born there, but Castro learned how to play while attending school in New York City. Orlando's father Miguel Ramírez played for the Colombian national team.

Ramirez played for Colombia in the 1969 Amateur World Series; a couple sources list him with five steals to tie Carlos Urriola for the event lead while others list only Urriola. He led the 1970 Amateur World Series with 8 stolen bases while helping Colombia finish 4th; his .368 average was 9th in the event, between Ramon Ortiz and Néstor Ramírez. In the 1971 Amateur World Series, he again led in swipes, this time with 7, as Colombia won a Silver Medal. He helped Colombia win the Bronze at the 1971 Pan American Games, their only Medal in a Pan American Games (through 2018). He was on the Colombian squad that won Gold at the 1973 Bolivarian Games, their last Gold at the Bolivarian Games until 2017. He managed Colombia in the 1994 Baseball World Cup.

Ramirez is the brother-in-law of Jackie Gutierrez.