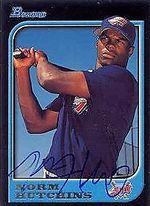 Outfielder Norm Hutchins spent 18 years in professional baseball, more than half of which in the independent leagues. He was initially taken by the California Angels in the 2nd round of the 1994 amateur draft, between shortstop Victor Rodriguez and pitcher John Ambrose. Drafted a few picks ahead of him was future Angels star Troy Glaus. He was signed by scout Jim McLaughlin.

This page is in need of some additional content. Please help the Bullpen by expanding it, or learn how to contribute.
Retrieved from "https://www.baseball-reference.com/bpv/index.php?title=Norm_Hutchins&oldid=1060918"
Categories: