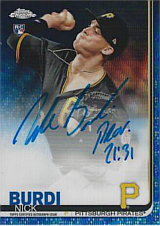 Nick Burdi was drafted by the Minnesota Twins in the 2nd round of the 2014 amateur draft. On December 14, 2017, he was drafted by the Philadelphia Phillies in the 2017 Rule V Draft, and was immediately flipped to the Pittsburgh Pirates for international bonus slot money. He had undergone Tommy John surgery in May 2017, so the Pirates knew he would not be available to pitch until the very end of the season, at best. Burdi made his major league debut with the Pirates on September 11, 2018 and pitched 2 games that first season, giving up 4 runs (3 earned) in 1 1/3 innings. He made the team out of spring training in 2019 and was okay in his first ten appearances (2-1, 4.32 ERA, 17 strikeouts in 8 1/3 innings). On April 22nd, he was getting roughed up (5 runs in 1/3 of an inning) when he crumpled to the ground in pain after making a pitch in the 8th inning against the Arizona Diamondbacks. He had to leave the game immediately and went on the injured list. On June 25, he underwent thoracic outlet surgery for the syndrome of the same name, ending his season and putting his 2020 in jeopardy.

Nick's brother, Zack Burdi, is a pitcher who made his major league debut with the Chicago White Sox in 2020.