Tiger Stadium, also known as "The Corner," was the home of the Detroit Tigers from April 20, 1912 to September 27, 1999. It is located at the corner of Michigan Ave. and Trumbull Boulevard in the historic Corktown neighborhood of Detroit, MI. Demolition of the park began in June 2008, with the last sections of the stadium ultimately falling in July 2009. 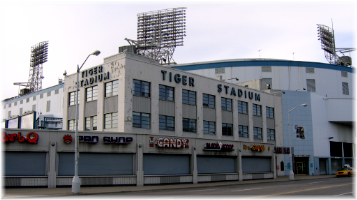 Bennett Park actually precedes the modern-day Tigers. It opened on April 28, 1896 and served as a ballpark for the Detroit affiliate of the Western League. It originally sat 5,000 and grew to 14,000 by the time it was demolished in 1911. Home plate was actually at the corner of Michigan and Trumbull. Bennett Park's name came from former Detroit catcher Charlie Bennett, who was crippled in a freak train accident. Tiger Stadium's beginnings do not start with Bennett Park; rather, they start with Navin Field, which is discussed below. 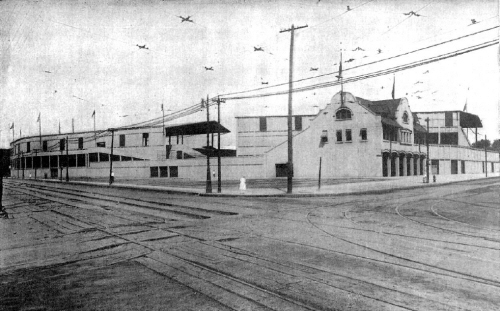 Navin Field at the corner of Michigan Avenue and Trumbull.

Tigers owner Frank Navin decided that he needed a new steel-and-concrete ballpark to handle the growing popularity of his beloved Detroit Tigers. In the winter of 1911, he had Bennett Park demolished and the Tigers acquired the property from National (now Cochrane) St and Cherry (now Kaline) St. Home plate was moved to the corner of National and Michigan, which consequently moved right field to the corner of Michigan and Trumbull. Navin Field opened on April 20, 1912 with a capacity of 23,000. Due to factors such as the game's rising popularity and the bustling population of Detroit, Navin decided to increase capacity for the 1923 season. During the winter of 1922-23, the grandstands from first to third base were double-decked, increasing capacity to 30,000. The park would remain in this configuration for the next 11 seasons.

In 1938 the stadium was renamed after Walter Briggs, the new owner of the Tigers. 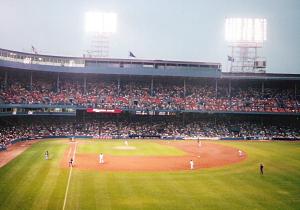 In 1961, John Fetzer took majority interest in the Tigers and became principal owner. He then changed the name of Briggs Stadium to Tiger Stadium.

In 1977, Tiger Stadium was sold to the City of Detroit for $1. As a result of the new ownership, Tiger Stadium underwent a major renovation from 1977-1984. Vinyl siding was added to the exterior of the stadium, a new scoreboard was added in center field, the wooden green seats were replaced with orange and blue plastic seats, the stadium was painted blue, and the light standards were upgraded. In 1993, when current owner Mike Ilitch assumed ownership of the club, the Tiger Den was added behind home plate, and Tiger Plaza made its debut at the exterior corner of Michigan and Trumbull, serving as a plaza for food, drink, and souvenir retail.

The city, the fans and former Tigers from the last 70 years gathered to give the stadium a grand send off on September 27, 1999. The day belonged to Tiger Stadium and its rich tradition. Todd Jones' final strike-three pitch settled into catcher Brad Ausmus' glove at 7:07 p.m. as flashbulbs popped, and a roar shook the ballpark as the Tigers wrapped up an 8-2 win in the stadium finale. The Tigers played their first game at Comerica Park in downtown Detroit on April 11, 2000.

On June 15, 2006, Detroit Mayor Kwame Kilpatrick announced that Tiger Stadium will be demolished, with a city-funded demolition set to begin in the fall of 2006. The historic playing field will be preserved in the new development to appear at the site. The development will include a ring of shops and condominimums around the baseball diamond, which will be converted into a public park.

In the years before the decision to demolish the stadium, the city rejected several proposals for developing the site. Among the proposals were plans to convert Tiger Stadium into condominiums, a jail, a shopping center. Another rejected plan involved converting parts of the stadium into residential lofts. Still another apparently rejected plan, floated by a Detroit area financier, would have reconfigured the stadium to its Navin Field size, which would also have included a museum, shops, and conference space.

Notable features of the park[edit]

Tiger Stadium is widely considered one of the classic ballparks of the game. Here are some notable features about the stadium: