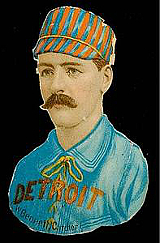 ". . . Charley Bennett in his time was the greatest throwing backstop in the country, barring one, Buck Ewing . . . Bennett was a good hitter . . ." - Ned Hanlon, quoted in the Sporting Life issue of September 11, 1897

". . . my favorite was Charley Bennett, the best backstop that ever lived in the world. He went after everything, he knew no fear, he kept his pitcher from going into the air." - Lee Richmond, quoted in Sporting Life, March 19, 1910

Charlie Bennett was one of the best-hitting catchers of the 19th century, mainly because of his ability to hit for extra bases. He was among the league leaders in home runs five times, in triples three times and in doubles two times. Bennett had a long career by 19th century standards. He spent the bulk of his career with the Detroit Wolverines before and at the time that the The Big Four played for Detroit. When Jack Rowe, the famous catcher of the group, came over to Detroit, Bennett stayed at catcher and Rowe moved over to shortstop. For seven years, Bennett was one of the oldest players in the league. At the end of his major league career he was playing for the Boston Beaneaters, who won the pennant each year from 1891-1893.

He lost both legs after being run over by a train while on a hunting trip with John Clarkson in 1894. As reported in 1907 "... his strong constitution pulled him through and he is alive today, a citizen of Detroit, engaged profitably in business and able to walk around by the assistance of artificial legs and canes". See [1]. Bennett Park, the first home of the Detroit Tigers, was named in his honor and Charlie threw out the ceremonial first pitch of the season every year through 1926.