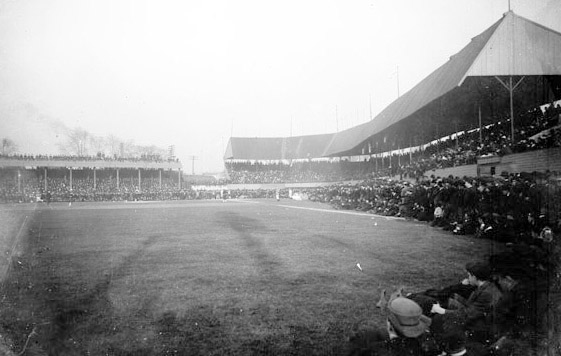 Constructed in 1896, Bennett Park was located at Michigan and Trumbull in Detroit's predominantly Irish Sixth Ward, an area known as "Corktown". Built where Tiger Stadium stands today, the park was named after catcher Charlie Bennett of the National League's Detroit Wolverines, who lost both legs after being run over by a train in 1894, and who threw out the ceremonial first pitch of the season for the Tigers every year through 1926. The park was located on the site of Woodbridge Grove, the farm of Michigan Governor and United States Senator William Woodbridge, and Detroit's old Haymarket, where farmers weighed and sold their hay. The field was quite hastily constructed by covering cobblestones of the market with topsoil. Thus, the infield was very rocky, and the outfield also turned marshy with any rain. In addition, the sun shone directly into the eyes of the batter in late afternoons. The park was built of wood and was surrounded by "wildcat bleachers", seats on rooftops just outside the park.

Shallow bleachers were constructed for the 1901 season, but overflow crowds were often forced to sit in the deep outfield. In their first game here, on April 25, 1901, the Detroit Tigers pulled off one of the greatest comebacks in baseball history. They were down 13 to 4 to Milwaukee going into the bottom of the 9th inning but rallied to score 10 runs in the inning and beat the Brewers, 14 to 13. Sunday games were not permitted here during the Tigers' first two seasons in the park, so they had to play in Burns Park on Sundays. By the mid-1900s, the Tigers had become a very competitive team, led by Ty Cobb, and the World Series were played in Bennett Park for three straight seasons, 1907 through 1909. During this time, the area around home plate, nicknamed "Cobb's Lake", was kept soaked by groundskeepers to help keep Ty Cobb's bunts fair. By 1911, Bennett Park was the smallest ballpark in the majors, and after the season the park was demolished to make way for Tiger Stadium, which still stands on the same spot.