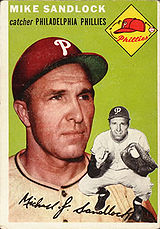 Mike Sandlock was a catcher for the Boston Braves, Brooklyn Dodgers and Pittsburgh Pirates. He also spent time in the Pacific Coast League with the Hollywood Stars (1949-1952). Mike was the roommate of Warren Spahn and they were called up together in September 1942. Mike had a single in his only at-bat in the majors that year. His season was cut short because of World War II.

Sandlock, born in 1915, was nearly 27 when he first came up with the Braves, and nearly 38 when he closed out his major league career with the Pirates in 1953.

Mike’s best year came in 1945 with the Dodgers when he batted .282. Interestingly, he played 47 games at catcher and 22 games at shortstop (plus a few at third and second). He had come up as an infielder but was being converted to a catcher.

His nickname on the Dodgers was "the Commuter" since he grew up and commuted from nearby Connecticut.

Mike's career was cut short in spring training of 1954 when, trying to make the Philadelphia Phillies as a back-up catcher, a rookie tried to impress his coaches by attempting to score from second on an infield single. He slid into home and Sandlock injured his knee in the collision.

Mike was an active golfer and stayed very active in the Baseball Assistance Team organization. BAAT helps older baseball players that do not have health insurance and may need some medical assistance. As of the start of December 2007, he was one of the oldest living ex-major-leaguers, with only Connie Marrero being older than him by the start of 2014. When Marrero passed away on April 23rd, just two days shy of his 103rd birthday, Sandlock took over the title of oldest living player at the age of 98. he became the 17th centenarian in major league history when he celebrated his 100th birthday on October 17, 2015. After his passing on April 4, 2016, 99-year-old Eddie Carnett became the oldest living player.