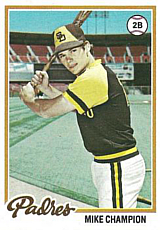 "It's rare for a team to bring up two kids together and have it work out. The only kids I can remember (as shortstop - second baseman) are Bill Almon and Mike Champion." - Alan Trammell, to Baseball Digest in March 1992, reminiscing about how Almon/Champion were kind of similar to Trammell/Whitaker

Mike Champion played three years in the majors and was the regular second baseman for the San Diego Padres in 1977. A youth movement was in full effect in San Diego, with Mike and Tucker Ashford, both 22, the youngest regulars on the team. The double play combo, Almon and Champion, honed their craft with the Hawaii Islanders before Mike debuted with a brief look in 1976. It was Mike's bat that kept him from greater glory, as he was only able to muster a .229/.271/.286 line in 150 games and 507 at bats. Fernando Gonzalez pushed Mike off second in 1978 and back to the minors, never to return. Bill Almon was pushed by a younger prospect named Ozzie Smith, who would see greater glory in St. Louis after being moved for his Padre replacement, Garry Templeton. As for Ashford, he would be replaced initially at third base by... that's right... Bill Almon, before Paul Dade joined the team in 1979.

Champion was born in Montgomery, AL and attended high school in Santa Ana, CA. He was a second-round draft pick in the 1973 amateur draft. Mike played seven seasons in the minors, most notably hitting .328 in Triple A in 1978. He was only 25 during his final season, in Triple A in 1980.