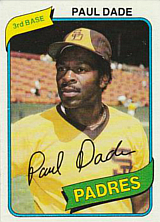 Paul Dade, a first-round pick in the 1970 amateur draft, played six seasons in the major leagues with a batting average of .270. He went to Nathan Hale High School in Seattle, WA. He played for the Salt Lake City Gulls, leading the Pacific Coast League in batting with a .363 average in 1976. He finished his professional career with the Portland Beavers in 1982, after playing in Japan in 1981.

The Cleveland Indians Encyclopedia has a photo of Dade being carried off the field on a stretcher in 1977 with the help of several teammates after he was beaned.

Source: Where Are They Now?