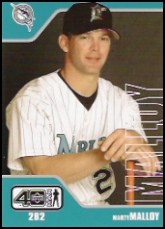 "What a perfect baseball name, Marty Malloy, its sounds soft and smooth and suggestive of another country boy's name, Mickey Mantle." - Dave Kindred writing an article about Marty Malloy in the April 1, 1996 issue of The Sporting News

Marty, who was in the majors two years, had a long minor league career, usually hitting around .290.

Paul Hemphill wrote a book about Marty Malloy and one season in A ball, called The Heart of the Game: The Education of a Minor League Ballplayer.

Malloy became a coach with the GCL Astros in 2013 then managed the same club in 2014-2016. He moved to the Philadelphia Phillies' organization as manager of the Lakewood BlueClaws in 2017. He served as the Phillies' minor league infield coordinator in 2021.