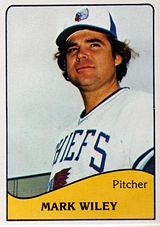 In 2006 and 2007, Wiley worked in the Colorado Rockies front office as a Special Assistant for Baseball Operations. In 2008 and 2009 Wiley served as Pitching Coach for the Florida Marlins. In 2011 and 2012, he was Special Assistant to the General Manager/Pro Scout for the Marlins. In 2013, he returned to the Rockies as the club's Director of pitching operations, responsible for overseeing the organization's pitching efforts, from Draft preparation to the Minor League clubs and the Major League club.