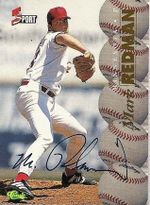 Mark Redman was dubbed by ESPN commentators as the "worst All-Star selection ever" after making the 2006 All-Star team despite posting a 5.71 ERA for the Kansas City Royals. Joe Morgan has used Redman as his shining example of why every team should not be guaranteed an All-Star. Redman made only 21 appearances at the major league level following his "All-Star" season.

On April 26, 2008, pitching for the Colorado Rockies, Redman allowed 10 runs in the 1st inning but remained in the contest; it was the first time in a century that this had taken place in the majors.