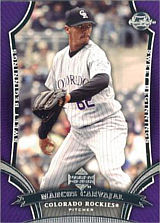 A native of Venezuela, Carvajal was signed by former All-Star Camilo Pascual for the Los Angeles Dodgers in September 2000 and made his debut with the La Pradera (VSL) club in 2001. He was drafted by the Milwaukee Brewers in the 2004 Rule V Draft on December 13, 2004, and sold to the Colorado Rockies the same day. He spent the entire 2005 campaign with Colorado, going 0-2 with a 5.09 ERA in 39 relief outings. Following that season, he was traded to the Seattle Mariners in return for Yorvit Torrealba on December 8th. Before the 2006 season, Carvajal was traded again, this time going to the Tampa Bay Devil Rays for Jose De La Cruz. He went 2-2 with a 3.86 ERA for the Double A Montgomery Biscuits that summer. He moved to the New York Mets the next year and went 5-10 for the Binghamton Mets. Late that season, he was claimed off waivers by the Florida Marlins and had a big league cup of coffee in September, making 3 late season appearances. He went 1-2 with a 6.92 ERA for the Albuquerque Isotopes in 2008 before being released in July. Carvajal continued to pitch in Venezuela through 2012. He also played in the Italian Baseball League in 2011, making his debut for the Montepaschi Orioles Grosseto on Opening Day in relief of Jean Carlos Granados. He allowed two runs in two innings in a loss to Novara United and went 2-2 with a 4.20 ERA on the season.

Carvajal died of pneumonia in January 2018, unable to obtain medication required for treatment because of difficult political and economic situations in Venezuela. He was only 33.