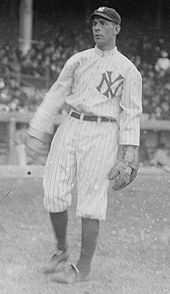 Lute Boone played second base for a couple seasons as the regular for the New York Yankees. After his major league days, he continued to play in the minors, with 14 straight years in the American Association. He was still playing even as late as 1935 - he was instrumental in reviving the Northern League by serving as league president in 1933-1934 and owner, manager, and player for the Crookston Pirates in 1933-1935. After he sold the team he managed Wausau. Lute and Marty Berghammer were the double play combination at St. Paul from 1919-1925. St. Paul's best year was 1922 when it won 107 games.