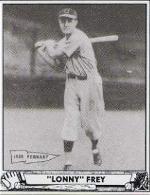 Infielder Lonny Frey, who played fourteen years in the major leagues, was a three-time All-Star and also appeared in three World Series. He was frequently among the National League leaders in walks, stolen bases, and sacrifice hits.

Originally a shortstop, Frey was signed by the Brooklyn Dodgers in 1932 and reached the majors with the club the following year, 1933. Despite being hit by a pitch in spring 1934 and suffering a concussion that hospitalized him for a week, he bounced back to hit .284 in 125 games that year. In 1935, he was the big slugger for the Dodgers, leading the team in doubles, triples, home runs and slugging percentage.

Following the 1936 season, Frey was traded to the Chicago Cubs. However, stuck behind second baseman Billy Herman, shortstop Billy Jurges, and third baseman Stan Hack on the depth chart, he saw limited playing time with the Cubs, who sold his contract to the Cincinnati Reds after one year.

The Reds moved the error-prone Frey to second base in 1938, and starting in 1939, he was exclusively a lefthanded hitter. He made the NL All-Star team for the first time in his career that year and batted second in the lineup in that autumn's World Series (where he was held hitless in 17 at-bats). The following summer, he paced the NL with 22 stolen bases, as the Reds went on to defeat the Detroit Tigers in the World Series.

After making the NL All-Star squad again in 1941 and 1943, Frey entered the Army in December 1943 and served two years. He returned to the Reds in 1946 and then ended his big league career with stints with the Cubs, New York Yankees, and New York Giants. He continued to play minor league ball in AAA through 1950.

There is one Hall of Famer on his list of the most similar players, that one being Phil Rizzuto, his teammate on the Yankees.

Frey died in 2009 at age 99. At the time of his death, he was the oldest surviving Pacific Coast League baseball player and the last surviving player to play for the Brooklyn Dodgers, New York Giants, and Yankees.