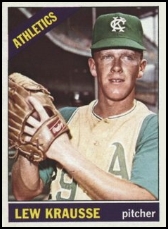 Son of Lew Krausse, Lew Krausse pitched 12 years in the majors, starting as the youngest player in the big leagues in 1961 and posting an ERA in the top ten in the American League in 1966.

He started the first home game in the history of the Oakland Athletics, facing the Baltimore Orioles at the Oakland Coliseum on April 17, 1968. Fifty years later to the day, on April 17, 2018, he returned to the Coliseum to throw the ceremonial first pitch at the game marking the team's 50th anniversary. The A's had granted fans free admission on this special occasion, so over 46,000 persons were on hand to witness the game. Two years after making A's history, he did the same for the Milwaukee Brewers, as the starting pitcher in their first-ever game on April 7, 1970.

Krausse was a star at Chester High School, pitching several no-hitters. Immediately upon graduation he signed with the Kansas City Athletics (another source says his father was a scout for the A's at the time) and appeared in the majors one week later, throwing a three-hitter. Source: Delaware County Sports Legends