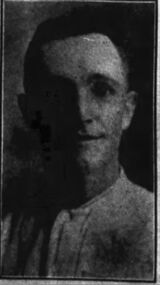 Les Channell appeared in 7 games with the New York Highlanders / New York Yankees. A left fielder, his lifetime major league batting average was .350 (7-for-20). His debut in 1910 was shortened by his suffering a broken leg when he slid into third base. Channell also played for Denver in 1912-13 and Buffalo in 1914-17. He led the Western League in home runs in 1913.