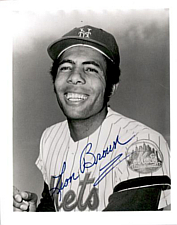 “The Mets were bringing up help for Del Unser, their weary center fielder. Playing every day because the Mets had no one to platoon with him in center, Unser recently endured a slump that reached 0-for-29 proportions. So on May 18, Leon Brown was called up. Brown, who had been kicking around in the minors for several years, is a right-handed batter. That’s the main reason he got the call. The Mets were desperate for any outfielder, particularly a center fielder, who could hit from the right side.” - Jack Lang, The Sporting News