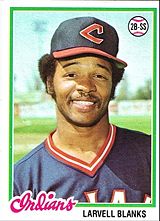 [Rico] Carty befriended an infielder named Larvell Blanks. Blanks thought he was a better player than Frank Duffy and should have been the regular shortstop. Blanks was half right. He hit more than Duffy, but his glove gave back the runs he produced. When Blanks wanted a sympathetic ear, he found one in Carty. 'I believe that Rico poisoned his mind,' said Robinson. 'One day I walked in the clubhouse, and Blanks had thrown his uniform, his glove, his bats, everything in the trash because I didn't start him. I fined him. Then he was on the bench wearing a piece of tape over his mouth. After my first year, Carty and Blanks were the only players I had trouble with.'" - Terry Pluto, The Curse of Rocky Colavito

"Sugar Bear" Larvell Blanks saw action in parts of nine big league seasons (1972 to 1980). He broke through as a semi-regular in 1975, seeing time in 141 games with the Atlanta Braves at shortstop with a rough .234/.292/.293 batting line in 471 at bats. He was flipped twice on December 12, 1975: first to the Chicago White Sox, alongside Ralph Garr, for three players, and then it was on to Cleveland in a one-for-one swap for Jack Brohamer. Larvell became a utility man of sorts, playing a variety of infield positions and improving his average some 50 points in the next two seasons in part-time play while stuck behind the glove of Frank Duffy, but falling in line with the unhappy Rico Carty killed his upward mobility. He got a final shot in 1978 as a regular, with Duffy dealt away to Boston, but errors (13 in 46 games at short) sunk him. Exiled to Texas and back to Atlanta, he struggled to stay above .200, seeing his final action as a utility middle infielder in 1980. He spent the next five seasons south of the border in the Mexican League, batting .319 in 124 games for the 1982 Azules de Coatzacoalcos, and in 1989 played with the Orlando Juice of the Senior Professional Baseball Association, hitting .277 in 52 games.

Blanks played for the Valley Verde team from Del Rio, TX in the 1962 Little League World Series. He was a multi-sport star in high school, including being quarterback of the football team. He was scouted and signed by Al LaMacchia after being a third round pick by the Bravos in the 1969 draft. His uncle, Sid, played in the AFL for the Houston Oilers and Boston Patriots. His cousin, Lance, Sid's son, played three seasons in the NBA in the 1990s.