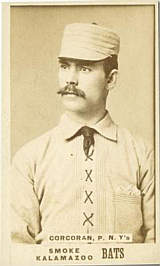 Larry Corcoran was a four-time 30-game winner who threw three no-hitters, a record that would not be topped until Sandy Koufax came along eighty years later.

Corcoran excelled from the jump, debuting with the Chicago White Stockings in 1880 and throwing an insane 536 1/3 innings. In 63 games, he was 43-14 with a 1.95 ERA and a league-leading 268 strikeouts. He started his career 22-3 - which was the MLB record for one's first 25 decisions until Alfredo Aceves broke it 131 years later. On August 19th, he spun his first no-hitter, shutting down the Boston Red Caps. Paired with Fred Goldsmith, it marked the first time a team used a "rotation" of sorts with more than one pitcher making starts. The next two seasons, Larry enjoyed a lighter load. He led the NL in victories while going 31-14 with a 2.31 ERA in 45 games in 1881. He got married during the 1882 season, leading the league in ERA (1.95) while finishing 27-12 in 39 starts. In September, he no-hit the Worcester Ruby Legs, becoming the first man to toss two in a career.

Larry's first season without an appearance atop the Triple Crown leaderboards came in 1883. His workload bulked back up to 56 games and 473 2/3 innings, with a 34-20 record but a career worst 2.49 ERA. In 1884, upon the denial of a modest raise (to $2,100 per year), he threatened to jump to the new Union Association and leave owner Al Spalding in the lurch. Upon being threatened with blacklisting, he came back and had one last great year. On June 16th, he entered the record books for a feat of ambidextrous pitching, alternating hands due to a sore right hand for four innings against the Buffalo Bisons. Eleven days later, he spun his third no-hitter, wiping out the Providence Grays. He was briefly teammates with his brother, Mike Corcoran, who made one rough outing on July 15th. At season's end, he had crafted a 35-23, 2.40 record with a career best 272 strikeouts in 516 2/3 innings.

With the rise of John Clarkson at the end of the prior season, Larry's career would soon come to a swift and inglorious end. He developed a sore arm from all of the innings logged and was released in July of 1885, joining the New York Giants for three starts to finish the year. He was a spare outfielder and pitcher in 1886, split between two teams, and was all done after a trio of games with the Indianapolis Hoosiers in 1887. He hung around the minors, even doing some umpiring, but his life was cut short by the kidney condition known as Bright's Disease, dying in 1891.