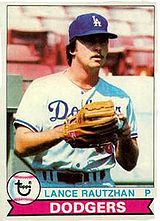 Selected by the Los Angeles Dodgers in the third round of the 1970 amateur draft, Rautzhan began his pro career that summer with the Ogden Dodgers, going 7-1 with a 2.65 ERA in 14 starts. The following year, he went 14-5 with a 2.08 ERA for the Daytona Beach Dodgers and tied Ruben Castillo for the Florida State League lead with 16 complete games.

Rautzhan was primarily a reliever when he reached the Triple A level in 1976. After starting 1977 with the Albuquerque Dukes, he was called up to the Dodgers. He made his big league debut July 23rd, throwing two scoreless innings against the Montreal Expos, and went 4-1 with a 4.35 ERA and 2 saves in 25 games for Los Angeles. The next year, 1978, he posted a 2-1 record, a 2.93 ERA, and 4 saves in 43 games for the Dodgers. He pitched in the postseason in each of his first two seasons, winning Game 3 of the 1977 NLCS against the Philadelphia Phillies; this was the game in which the Dodgers came back from a 5-3 deficit in the top of the 9th inning thanks to key pinch hits by Vic Davalillo and Manny Mota which started a two-out rally. He pitched in the 1977 and 1978 World Series, both times against the New York Yankees.

Rautzhan was 0-2 with a 7.45 ERA in a dozen appearances for L.A. in 1979 before his contract was sold to the Milwaukee Brewers in May. He made 3 big league appearances for the Brewers and then returned to the minors, never making it back to the big leagues.

Following his baseball days, Rautzhan owned a hotel in Adamsdale, Pennsylvania, and then moved to Myrtle Beach, South Carolina, where he passed away in 2016 after a long battle with cancer.

Rautzhan's father, William Rautzhan, was a minor league first baseman in the Chicago White Sox chain from 1946 to 1949.