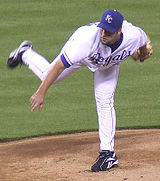 Kyle Davies was drafted by the Atlanta Braves in the 4th round of the 2001 amateur draft. He was signed by scout Rob English and made his pro debut that summer.

Davies was one of many Atlanta Braves players that were brought to the Kansas City Royals when former Braves executive Dayton Moore took over as the Royals general manager. He gave up Alex Rodriguez's 500th career home run on August 4, 2007, then faced him again on July 24, 2010 with A-Rod sitting on 599 homers, but escaped without allowing the historical blast.

After having been out of the major leagues since 2011, when he last pitched for the Royals, Davies came back for one game with the New York Yankees in 2015. Facing the Boston Red Sox on April 12th, pitching 2 1/3 scoreless innings in relief to complete a 14-4 win. He had missed the entire 2012 season with an injury, then begun his rehabilitation in the Minnesota Twins organization in 2013. In 2014, he moved to the Cleveland Indians, going 11-9, 3.91 between the AA Akron RubberDucks and the AAA Columbus Clippers. He had another solid season for the AAA Scranton/Wilkes-Barre RailRiders before and after his short return to the Show in 2015, going 11-8, 3.60 in 27 games as a starter.