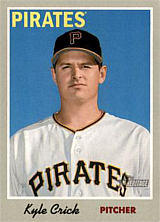 Crick was timed at 95 mph in high school with a slider in the 88-90 mph range. He was 7-2 with a 1.11 ERA but had control issues. He had a commitment to TCU when the San Francisco Giants took him 49th in the 2011 draft. The pick, San Francisco's second after Joe Panik, was compensation for the loss of Juan Uribe to free agency. Despite his commitment, he soon signed with San Francisco with a $900,000 bonus. He made his pro debut with the AZL Giants on June 20th, throwing a scoreless inning and a third of relief.

Crick made his major league debut on June 22, 2017, a full six years after having been drafted. At first, he moved quickly through the system, reaching the AA Richmond Flying Squirrels in 2014, but he got stuck at that level for three years. After going 4-11, 5.94 in 2016, he was converted to a relief pitcher and that seemed to help him take the final step. He started the 2017 season with the Sacramento RiverCats in the AAA Pacific Coast League and went 1-2, 2.76 with 6 saves in 24 games, all in relief, before his major league debut. With the Giants, he pitched another 30 times with no decisions but a solid ERA of 3.62. He allowed just 22 hits in 32 1/3 innings, while striking out 17 (against 11 walks).

On January 15, 2018, he was traded to the Pittsburgh Pirates, along with minor league outfielder Bryan Reynolds and $500,000 in international bonus money for former MVP Andrew McCutchen. He had a very solid first season with the Pirates in 2018, making 64 appearances in relief and going 3-2, 2.39 with 2 saves; he pitched 60 1/3 innings and struck out 65 batters. He did not do as well in 2019 and, on September 9th, he got into a clubhouse fight with closer Felipe Vazquez and ended up with a damaged tendon in a finger, an injury that required surgery; both players were fined. This was not the first conflict on the team, as in July, fellow reliever Keone Kela was suspended for two games after an argument with a coach, and Crick himself had another serious argument with bullpen coach Euclides Rojas. He was 3-7, 4.97 in 52 games at the time of the injury.