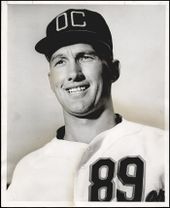 Ken Retzer played four seasons in the major leagues, serving as the first-string catcher for the Washington Senators in both 1962 and 1963.

After spending years in the minors, he made his major league debut in September 1961. He had spent most of 1961 with the San Diego Padres. In his first stint with the Senators, Ken hit .340 in 53 at-bats. Gene Green was the Senators' regular catcher in 1961.

He spent most of 1964 playing for the Toronto Maple Leafs, hitting .239 while having an .094 average in 38 at-bats for the Senators. It was his last season in the big leagues.

In 1965 Ken played for the Denver Bears and in 1966 for the Oklahoma City 89ers. He was 32 in 1966, the same age as Jim Gentile, his teammate at Oklahoma City. In 1967 Ken split his time between the Rochester Red Wings and Portland Beavers. His manager at Rochester was Earl Weaver, at the time a veteran minor league manager who would start on a major league managing career the next season.