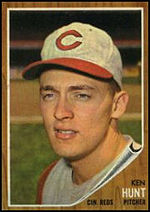 Ken Hunt was a member of the starting rotation of the Cincinnati Reds in 1961, his only major league season. The Reds won the pennant with 93 victories that year.

The team's ERA that year was 3.78, third in the National League, and Hunt's at 3.96 was close to the team average. Since Crosley Field was a hitter's park that year, the pitching was even stronger than it seemed.

He is not to be confused with his contemporary, Ken Hunt, an American League outfielder.