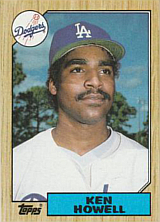 Ken Howell was signed as a 3rd round pick in the 1982 amateur draft by the Los Angeles Dodgers and scout Tony John. Howell was MVP of the 1984-1985 Dominican League; the next pitcher so honored would be 30 years later when Marcos Mateo received the honor.

Howell passed away in November 2018. He was 57. He had suffered from diabetes as well as pancreatic necrosis.