Note: This page discusses 1970s outfielder Ken Henderson. For others with the same name, click here. 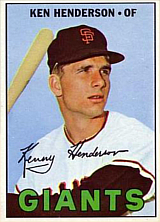 Switch-hitting outfielder Ken Henderson came up to a San Francisco Giants club just one year after he finished high school at the age of 18 in 1965. The Giants developed so many outstanding outfielders stars such as Willie Mays, the Alou brothers, Bobby Bonds, Dave Kingman, Gary Matthews Sr., and Garry Maddox, George Foster, not to mention first basemens like Willie McCovey and Orlando Cepeda who also spent time in the Candlestick Park outfield at times. Ken was a very good defensive outfielder, and could hit; he was a switch-hitter. He played 16 big league seasons. In 1994 for the Chicago White Sox, his average was. 292, he hit 20 home runs, and had 95 RBI, finishing 18th in the MVP voting.

He is the son of long-time scout Joe Henderson and brother of Robbie Henderson and Joe Henderson Jr.. His son Kenny Henderson also played in the minors. He is also a cousin of Kerry Dineen, on his mother's side. While he was born in Iowa, his family moved to the San Diego, CA area when he was a young child. He grew up and attended high school there, and his brothers were born there as well. Ken has four kids: Virginia, Kenny, Stephanie, and Zachery.