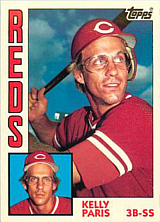 Kelly Paris had most of his major league playing time with the Cincinnati Reds in 1983, getting 138 plate appearances in 56 games and putting up a .250/.336/.300 batting line. He spent 1984 in the minors, then 1985 and 1986 in the Baltimore Orioles' organization, getting into a handful of games at the big league level each year.

The day after Christmas in 1986, Paris was involved in a car accident while driving under the influence of alcohol, the result of which was that he missed the 1987 season. In the wreck, he sustained a bruised sternum, a broken back and broken ribs, and took a job during the '87 campaign working in a dental lab. He got sober [1] and returned to the major leagues with the Chicago White Sox in 1988. Paris hit 2 home runs on August 13th as a member of the White Sox against the Seattle Mariners. They both came against Mark Langston. Paris had started the game hitting 6th and playing third base. Paris hit all 3 of his career home runs in 1988, the first coming a week earlier on August 7th against the California Angels. The pitcher for his first home run was Chuck Finley.

In 1994, Paris became head coach at Montclair College Preparatory School [2]. In his later years, he resided in Belmont, NC where he died of lung cancer at age 61 in 2019.