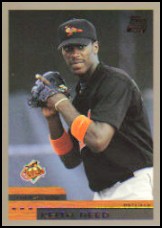 Keith Reed was drafted by the Baltimore Orioles in the first round (23rd overall pick) in the 1999 amateur draft. Reed was one of the most promising players of that draft, and at the time seemed poised for stardom, but never came close to reaching that level of success. Baseball America ranked Reed as the best athlete, the second fastest athlete, and the third best arm strength in the 1999 draft.

The Orioles gave up on him after that season and Reed joined the Newark Bears of the independent Atlantic League for 2007.