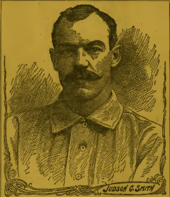 The Sporting Life issue of September 17, 1898, featured a large drawing of Smith on its front page, and gave a history of his professional career, which the paper said had started in 1890 with Portland. However, he may have previously played with Wheeling.

Smith made his major league debut in 1893 after the Cincinnati team released Bob Caruthers, a two-way player who was hitting .292 at the time. Smith, who had been sitting on the bench, made his debut a few days after Caruthers was released. Smith was then traded to St. Louis before the 1893 season was over.

The book Low and Inside states that Smith was very superstitious and relates a tale from when Smith played for Syracuse in 1897.

After his major league days Smith played for Los Angeles, where he was a teammate of Gavvy Cravath and Dummy Hoy. In 1903 he led the team with 57 stolen bases. He was also at Toledo in 1902.