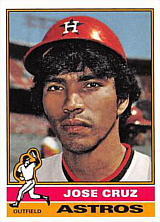 José Cruz was a consistently good hitter who played most of his 19-year career for the Houston Astros. He might have posted even better stats had he been able to play in an easier home park.

Although Cruz rarely led the league in offensive categories, he was a well-rounded player who finished as high as third in the MVP voting (in 1980). He was twice third in the league in batting, and at various times in his career finished in the top ten in virtually every offensive category. He was also a decent defensive outfielder, although he never won a Gold Glove. The most similar player, according to the similarity scores method, is his contemporary Amos Otis, also a talented all-around player.

Cruz was nicknamed "Cheo" when playing in Puerto Rico baseball, and was the best known baseball player from Puerto Rico in the 1980s.

Playing for a Houston Astros team that featured orange and red rainbow jerseys, Cruz was easily recognized for his individuality and particular stance - socks pulled high, a high leg kick and bat held high - but it was his offensive numbers and his aggressive slashing swing that made people remember him. Cruz was an All-Star in 1980 and 1985. He had two brothers, Hector Cruz and Tommy Cruz, who also played in the majors; all three brothers were briefly teammates with the St. Louis Cardinals in 1973. His son, José Cruz Jr., made his major league debut in 1997 with the Seattle Mariners. His other son, Jose E. Cruz (also known as Enrique Cruz) played in the minors. His grandson, Trei Cruz - Jose Jr.'s son - was drafted by the Detroit Tigers in the 3rd round in the 2020 amateur draft. Additionally, his nephews Cirilo Cruz and Alberto Cruz played in the minors. Jay Buhner, Roberto Kelly, and Alvaro Espinoza all played with both Jose Cruzes.

Initially signed by Cardinals scout Chase Riddle, the Astros purchased his contract in 1975. Cruz flourished as a player a year later. His introduction before every home at bat: Now batting, left fielder, No. 25, Jose Cruuuuuuuuuuuuuuuuz, Fans joined in as Cruz was introduced. Cruz was an excellent contact hitter, and despite playing his home games in the pitcher-friendly Astrodome, through 13 seasons he hit .292 in Houston and .284 for his career, with 2,251 hits in 2,353 games. He hit 165 homers, stole 317 bases, scored 1,036 runs and drove in 1,077.

After retiring from Major League Baseball in 1988, José Cruz played for the Orlando Juice of the Senior Professional Baseball Association. He hit .306 with 10 homers and 49 RBI for the club. In 1990 he played for the Daytona Beach Explorers, also of the SPBA; Cruz was batting .326 with 1 home run and 15 RBI when the league ceased operations in December.

In 1992, José Cruz's #25 was retired by the Houston Astros. In 2019, he became an inaugural member of the team's Hall of Fame. In 1997, he was named first base coach for the Astros, a position he held through multiple managers. His tenure ended with the conclusion of the 2009 season. He continues to be a popular Astros and Puerto Rican icon.

José played for the Ponce Lions and the Caguas Creoles of the Puerto Rico Winter Baseball League.