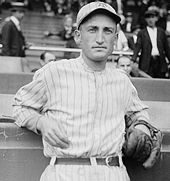 Rawlings, although not a strong hitter, was good enough to play for John McGraw's pennant winning New York Giants in 1921-22, and in the 1921 World Series he hit .333 with 3 doubles. Late in his career he was also on the pennant-winning 1925 Pirates although he did not appear in post-season play.

Johnny was born in Iowa but attended high school in Los Angeles, CA. By age 18 he was playing for Vernon in the PCL and then was with Victoria in 1912-13.

He split his rookie season of 1914 between the NL Cincinnati Reds and the FL Kansas City Packers. He stayed with the Packers in 1915 but then spent the rest of his major league career in the National League, through 1926.

1916, though, was spent in the minors at Toledo, for whom he had 13 triples. After his major league career he also played in the minors through 1930, ending up in Los Angeles.

The book Baseball in Long Beach has a photo of Rawlings in 1926. He was there playing in the California Winter League.