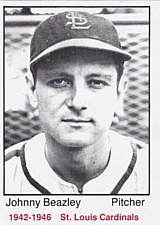 "Johnny Beazley won 21 games in '42. He had great stuff and good control, but he did have a temper. Johnny never had a dad. His mother was always up there with him. Beazley was nice to all the players, got along with them good. But he was more a loner. He had an awful temper when things went wrong out there, which a lot of guys do." - Max Lanier, in Peter Golenbock's The Spirit of St. Louis

In 1942, Johnny Beazley won 21 games as a rookie for the St Louis Cardinals and added two more victories in the team's World Series victory over the New York Yankees. Possessed with skills that made even the best of scouts' mouths water, he was expected to be great for years to come. However, Beazley enlisted in the U.S. Army Air Corps during World War II on November 3, 1942, and was commissioned a second lieutenant on March 3, 1943. He was sent to pitch for an Army team and a year later, overtaxed by the Army, felt pain in his arm. Ordered by his commanding officer to pitch through the pain, Beazley did permanent damage and was never the same again. He was released from the Army on March 17, 1946, but won only nine games for the rest of his career. In 1949, he was briefly interim manager of the St. Petersburg Saints. After leaving baseball, he was a beer distributor and died of cancer at age 71.

This manager's article is missing a managerial chart. To make this person's article more complete, one should be added.
Retrieved from "https://www.baseball-reference.com/bpv/index.php?title=Johnny_Beazley&oldid=1208915"
Categories: